Fishing for Pollock in a Sea of Change – A historical analysis of the Bering Sea Pollock Fishery, reviewed by Dr. Fred Utter, University of Washington

True to its title, this book contains abundant historical information about the Bering Sea Pollock fishery.   Its release concurs with Billion-Dollar Fish: The Untold Story of Alaska Pollock (Bailey 2013), a book I intentionally postponed reading prior to preparing this review. 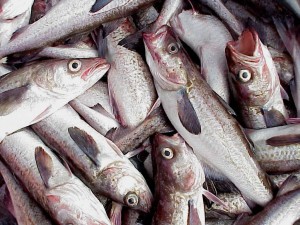 Although the present volume should attract a wide interest given the fishery’s great economic, political and biological interest, potential readers need to be aware that it is an unnecessarily difficult read.  Following the first chapter’s clarity (through the mid-1970s), the ability to follow a linear thread of developments becomes challenging.  Too many relevant details required mining from a text that is excessively burdened with inconsistently applied acronyms.   A guide through this “alphabet soup” ultimately came at the end of the book, and I advise printing out this information (my ultimate strategy) as a guide to reading.   Further distractions included sometimes excessive verbatim references from documents or interviews (seemingly indiscriminately given either as indented subtexts or as within-text quotations) that would have benefited from abbreviated summary statements.   Thick and often redundant text arising from such diversions masked a valuable story.

The Table of Contents presents a logical and largely acronym free outline of the relevant information.  The potential readership would be well served by preparation and description of these primary issues in the form of an extended executive summary.   In such a streamlined format, the necessary details could be presented more generically, where the present book could serve as a point of reference for the entire story. 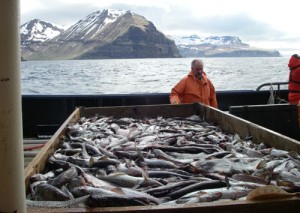 Despite the above challenges, the history and status of the Pollock fishery ultimately emerged from my reading.  A map relating the 200-mile limit to the U.S. Exclusive Economic Zone for the Bering Sea/Aleutian Island was particularly valuable in understanding the Americanization of the Bering Sea/Aleutian Island Pollock fishery.   The underlying politics and economics of this process over the past 40 years are indeed complex and certainly warrant the broader understanding that I gained.   Similarly complex and presently regulated under the American Fisheries Act are the harvest management and distributions of the inshore/offshore sectors of what has evolved from the dynamics of a gold rush towards a stable and very profitable fishery.   Among fishers, processors and communities, long term tensions have eased through actions including mandated (and compensated) fleet reductions and widespread cooperatives facilitated through anti-trust exemptions.  The annual distribution and investment of roughly 10% of the total allowable Pollock fishery to six coastal community development entities within the economic zone is in itself a fascinating narrative of empowerment to largely impoverished areas, and an enlightened model for other areas and industries.

Except for the by-catch of salmon and fishery interactions with Stellar sea lions (briefly considered and presently unresolved), biological and ecological effects of the Pollock fishery were not addressed.   Such historical analyses are also needed for adequate monitoring, evaluation, and responses.  Is this fishery a model for sustainability or is it destined for ultimate collapse as occurred with Northwest Atlantic cod?  Perhaps I will gain further insights from my reading of Bailey (2013).

Authors biography from “Fishing for Pollock in Sea of Change”: Photo Credits, University of Alaska, Fairbanks. 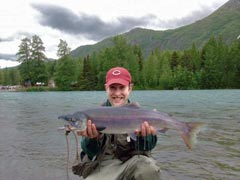 James Strong completed his M.S. in fisheries under Dr. Keith Criddle from the University of Alaska Fairbanks in 2011. His master’s thesis–Fishing for Pollock in a Sea of Change: A Historical Analysis of the Bering Sea Pollock Fishery–documents the evolution and history of the Alaska pollock fishery.

Dr. Keith Criddle, professor at University of Alaska Fairbanks: My research focuses on the intersection between the natural sciences and economics and is driven by an interest in the sustainable management of marine resources. My particular focus has been on the management of commercial, sport and subsistence fisheries in the North Pacific. My focus will be expanding to consider a broader array of marine policy issues.