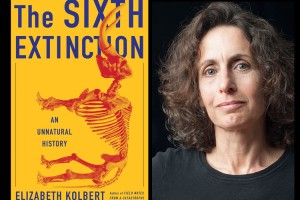 This book is properly focused in the prologue by the author’s emphasis of the present being a truly extraordinary moment of history to be viewed with fascination and horror. The story is expertly developed from onsite visits and authoritative interviews that bring the reader directly in touch with the scientists and the resources in question. These elements are continually interwoven in a tapestry combining history and mystery and ever reinforcing the truth of Pogo “WE HAVE MET THE ENEMY AND HE IS US”.

Through the fourth chapter, we are reminded that this wisdom regarding our destructive nature is recent, given that even the concept of extinction is barely 200 years old – expanding from the insights of Cuvier. Even as fossils accumulated, uncertainty persisted regarding possibly still-extant forms in unexplored regions, as can be seen in the written records of the Lewis and Clark expedition. With the certainty of earlier extinctions (end Ordovician 450 my, late Devonian 360 my, end Permian 220 my, late Triassic 200 my, end Cretaceous 65 my), questions persisted regarding their cause. While the meteoric driven end of the dinosaurs has only recently been accepted, some more speculative explanations for earlier extinctions include ice ages precipitated by CO2 assimilations (late Ordovician), and conversely, high carbon-induced warming, reduced pH, and high H2S. This latter explanation is, by the way, the prominent theory behind the Permian-era extinctions that resulted in 90% of life on Earth becoming extinct and, frighteningly, significantly parallels our present situation.

Interestingly, even Darwin failed to give special status to humans as agents of the current wave of extinctions, which is termed the Anthropocene. The “evil twins” of ocean acidification and warming are vividly displayed in the microcosm of marine thermal vents. When one approaches a marine thermal vent, one can see healthy biological communities gradually yielding to lifeless environments (need a more detailed explanation here – in author’s own words – of how ocean acidification/warming correlate with marine thermal vents). The dynamics of this current wave of extinctions are exacerbated by the “new Pangea” where non-native organisms invade new environments, disrupting stable ecosystems and sometimes generating massive die offs, as seen with the incredibly high, fungal-induced mortality rates experienced by bat species in North America and amphibian species throughout the world. Conversely, but also exacerbating the dynamics of extinction today, fragmented ecosystems prevent gene flow among formerly connected meta populations, putting populations on downward trajectories toward extinction. Species rescue programs, such as zoos, terraria and gene banks, are heroic but perhaps futile gestures for saving near-extinct taxa as circumstances in the wild continue to deteriorate.

Perhaps most disheartening is the chilling implication that our present course is “written in our genes”. Everywhere Homo sapiens has colonized, mega fauna have disappeared. Even our Neanderthal cousins coexisted with such life forms in Europe for over 100,000 years until our arrival, which eliminated the mega fauna and themselves (after assimilating portions of their genome).

Are we in the process of “sawing off the limb where we are perched”? In spite of the bleak picture, predicting the future remains a futile exercise. Perhaps technology will trump ecology. Despite our past failures in prescribing quick fixes for complex messes (think salmon hatchery complexes for lost ecosystems), a new order may yet emerge from the inevitable and pending chaos.

I try to remain an optimist, and a good point of departure from my own reading of this book is to encourage all responsible readers to assimilate its message. Perhaps a widespread and profound understanding of our self-induced and impending tragedy can generate the will and action necessary for generating effective remedial measures. 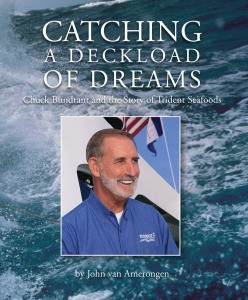 True to its title, this book is centered on Chuck Bundrant’s leading role in the development and direction of Trident Seafoods. Excepting entire segments written in the first person by family members, the text consists of vignettes from extensive interviews with Bundrant himself and many others. These statements are interconnected more or less chronologically by the author within and among 33 chapters plus prefatory and concluding materials (and all worth reading).

The author, hired by Bundrant in 2006 to write the book, develops a complex and very human personality starting with his youthful migration westward and northward just a year out of high school in 1961. With underlying determination, independence and a strong work ethic, Bundrant had little trouble getting entry-level work on Alaskan king crab processors, gaining experience including – by necessity due to a drunken skipper – sharing the running of a boat back to Seattle; he wasn’t necessarily against partying, just not on work time. Using his savings, he invested in his first boat, a broken down gill-netter in Seward. This misadventure didn’t pan out but led to a series of serendipitous events including saving the life of Clem Tillion (who, as an influential legislator returned the favor 10 years later by saving Trident’s financial life), and – again by pure coincidence, assisting and ultimately crewing with the prospering Burch brothers, which guided him towards obtaining his own fleet.

These stories, and those that follow are mostly flavored with salt air, testosterone, ever-present danger, sometimes blue language, and just good story telling reminiscent of the wild west and “The Deadliest Catch”. Particularly memorable were the stories:
1) of FV Bountiful’s construction (in an Indiana shipyard where Bundrant ended up buying the bankrupt yard for $5!);
2) the entire Akutan adventures including the fire, rebuilding and present operation with the present manager being “mayor of a town of 1,200 workers”;
3) the aerial adventures including the Grumman Goose (reminiscent of my first Bristol Bay adventure in 1953) and float plane takeoff failures (and once again the fortuitous arrival of Chuck Bundrant);
4) ultimate vindication in the class action efforts and other political and legal struggles leading to full American sovereignty in the Alaskan Exclusive Economic Zones and
5) the long-term negotiations with Tyson and the ultimate assumption of its fleet.

But the underlying message goes far beyond excitement, adventure and danger. It speaks to the character, indeed the soul, of the corporation itself as epitomized by its founder (and with providential guidance as Bundrant might profess). There is ambition without greed, toughness without cruelty, choosing and listening to strong associates without cronyism (but still the ability to make unpopular decisions when warranted), vision to face setbacks as challenges rather that defeats, and particularly – viewing all involved personnel as members of a team akin to a family.

A down side of these characteristics is a perceived isolation implied in each of the statements of the Bundrant children Joe, Jill and Julie. Each of their writings reflected deep love and respect for their dad, but an absence of intimacy that would come from a – perhaps less authoritarian parent with similar attributes and a job that permitted more home time during their formative years. Indeed, I missed on first reading that their birth mother (Mary) was around at least through 1980 (according to Joe), but by 1982 Chuck was married to present wife Diane. The author stipulated that some stories he chose not to print and I will not speculate beyond noting that by “treating everyone the same (p. 14)”, there may have been a domestic penalty to be paid.

Some final notes, in addition to the Alaska map (preceding chapter 1), a chart of the current corporate structure and staffing would have clarified some confusion regarding who’s doing what and where. As a biologist, I appreciated the doubled efficiency achieved in Pollock processing by Trident, but was disappointed that nothing was mentioned about crashing king crab populations other than it promoted a new fishery of smaller snow crab. These are minor quibbles. It was a long book, but I’m glad I committed to its review. It was worth the effort and promises to make fascinating reading for a diverse audience interested in corporate growth, Alaskan wilderness, and particularly, human nature. 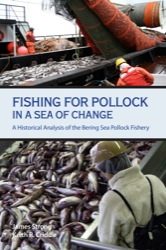 In The Book Nook Section of this issue, our focus is on pollock with two books published this year by prestigious publishers.  The first book review is for Fishing for Pollock in a Sea of Change.  The book is written by James Strong and Keith R. Criddle, and reviewed by  UW professor Fred Utter.  The second book reviewed is month is published by the University of Chicago Press and  is reviewed by Orlay Johnson Billion-Dollar Fish – The Untold Story of Alaska Pollock written by Kevin Bailey.  Orlay’s review of Kevin’s book is here.